To understand the Sikh view of marriage, we need to turn to the third Nanak, Guru Amardas Ji, who speaks of a marriage in purely spiritual terms: a mere physical union, he tells us, is no union at all, no matter how close; it is only when souls meet can we speak of a true union:

For Sikhs, then, a marriage is not merely a legal or social contract, although in a real sense it is that as well; nor is a marriage to be viewed solely as a license for physical consummation, although it is a necessary element as well..

The key to understanding the Sikh view of marriage is to view it as an unfolding of a spiritual journey. Two ego-bound individuals promise to undertake what is a solitary spiritual journey together – to transcend what is outwardly a social and physical bond into a sacrament. 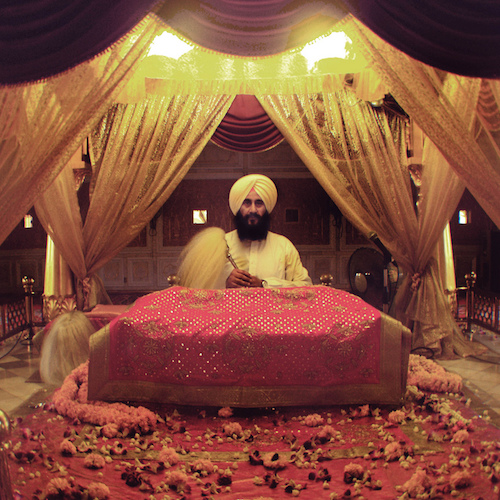 The hymns celebrate the wedding of the individual soul with that Great Spouse who resides in us all and should be seen as a metaphor for the development of an ideal relationship that is characterized by mutual respect, love, restraint and harmony.

The four circumambulations of the Guru Granth by the couple reflect their acknowledgement of these steps.

The first hymn is foundational in that it orients the Sikh to the “right way”, in this case called “parvirti marg” or the path of an active householder. This instruction is significant: it recognizes and sanctifies marriage as the desired mode of existence and calls for an active engagement in the world.

A marriage becomes training ground for spiritual formation. After the initial euphoria wears off and when romantic illusions melt away, hard choices have to be made: between flight and unconditional love.

Depending on the choices one makes, a marriage will either become a spiritual experience where love and faith spring forth or become a prison of habitual patterns where husband and wife become locked in narcissistic ego warfare.

The right choices are made by listening to the Guru’s instructions (bani) that call for the cultivation of Dharam (inner qualities or virtues) aided by fixing one’s mind on the Word.

The second hymn builds on the first. A husband and wife who commit them selves to the spiritual ordeal of cultivating Dharam begin to shed their constricting egos and come to recognize the divine presence in each other. They learn to walk with awareness of the One that pervades all. This brings about a shift: one who fears God and sees the divine presence everywhere does not fear anything, but rather acts with sensitivity, moral and ethical rectitude and sympathy.

The third hymn speaks of “chao,” which does not have an exact English equivalent, but could be described as Love tinged with enthusiasm and freshness. Love here knows no staleness. The affection for parents and family gives way to a more overpowering love that knows no rival. One looks to the new with enthusiasm or chao as the old recedes.

The culmination of this process is described in the concluding hymn as Sehaj – where the individual abides in a state of natural ease and a dynamic balance. This is peak spiritual experience.

THE CEREMONY
The Anand Karaj, like all Sikh rites of passage, is always performed in the presence of the Eternal Guru of the Sikhs as enshrined in the Holy Scripture called the Guru Granth Sahib and witnessed by a community of relatives and friends, called Sangat.

This mystical union of the Guru, the Eternal Teacher, and the congregation (Sangat) incorporates the presence of God in our consciousness (“vich sangat har prabh vasai jio”). The Bride and bridegroom are thus mystically seated in the lap of God, the source of all love and affection and the blessing of the congregation is with them.

The ceremony follows the pattern below:

Reserving a day for Anand Karj at Gurdwara Sahib:

Gurdwara Singh Sabha Fresno follows the Sikh Rehat Maryada (Sikh Code of Conduct) while officiating Anand Karj. Service Charges for holding an Anand Karaj at Gurdwara Sahib is $2100, of which $1000 must be paid at the time of reservation. This service charge covers Bheta for the Head Granthi, Associate Granthi, Kirtani Jatha, Gurdwara maintenance and Cleaning crew etc. For reserving a day, please download the Anand Karj Booking form and submit the completed form along with deposit payment to: General Secretary: (559) 779-2286 or Treasurer: (559) 273-2956